Explore more
GET IN TOUCH WITH US

Chandrayaan-2 is the second lunar exploration mission developed by the Indian space research organisation (ISRO),after chandrayaan -1. It consists of a lunar orbiter , the Vikram lander , and the pragyan lunar rover , all of which were developed in India. The main scientific objective is to map the location and abundance of lunar water via Pragyan, and ongoing analysis from the orbiter circling at a lunar polar orbit of 100 × 100 km.

On 22 July 2019, a Geosynchronous Satellite Launch Vehicle Mark III (GSLV Mk III) launched the mission to the Moon from the second launch pad at the Satish Dhawan Space Center on 22 July 2019 at 2.43 PM IST (09:13 UTC).The craft reached Moon’s orbit on 20 August 2019 and started orbital landing maneuvers. Vikram and the rover were scheduled to land near the Moo’s side. At approximately 1:52 am IST, however, the lander deviated from its planned trajectory at approximately 2.1 kilometers (1.3 mi) from the landing and the spacecraft’s last place showed that it was 1 km its landing site is 60 m/s upright and 48 m/s upright.

The ground station of the ISRO lost touch with the Vikram lander as it was only 2.1 km above the lunar surface, just as it was about to touch the specified landing site. ISRO said, however, that it is not certain whether or not the lander crash landed. The space agency added that it is currently analyzing the accessible information with it to determine the reason for the snag and the results will be made public at a subsequent date.

“Vikram lander descent was as scheduled and normal performance was observed at an altitude of 2.1 km. Thereafter, communication from lander to ground station was lost. Data is being analyzed,” ISRO chief K Sivan announced to a crowd of distracted researchers from ISRO mission control. Prime Minister Narendra Modi, who was present at the ISRO Telemetry, Tracking and Command Network (ISTRAC).”Life is full of ups and downs. That’s no small achievement. The whole nation is proud of you. Hope for the best,” said PM Modi. Notably, although communication with lander Vikram and rover Pragyan is lost, the 100 km orbit Orbiter is still operational with eight working science payloads.

Chandrayaan 2 is hitting a snack! ISRO loses touch with the Vikram lander 2.1 km above the surface of Moon 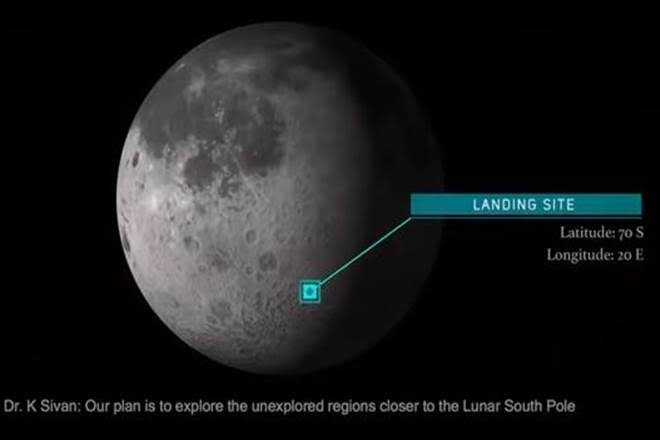 India’s Chandrayaan 2 came close to a historic achievement before contact with lander Vikram was lost just 2.1 km above the surface of the Moon. The snag happened minutes after the module started the good braking stage of its descent to the unexplored South Pole lunar.”This is Mission Control Centre. Vikram lander descent was as scheduled and normal performance was observed at an altitude of 2.1 km. Thereafter communication from the lander to ground stations was lost, “ISRO chief K Sivan informed a crowd of distracted researchers anxiously wake up.

The Indian Space Agency is now looking at accessible data to find out what went wrong with Vikram’s soft landing at the last minute. The module was accountable for putting the Pragyan rover on the Moon as well as gathering critical data on soil composition, climate and seismic activity around its assigned landing site.

With the effective ascent of Vikram to the Moon, India could have become the fourth nation to become a craft on the lunar surface after the US, Russia, and China. It might also have been the first nation to put a lander on the Moon’s still undiscovered South Pole.Although ISRO researchers appeared to be dismissed at the Chandrayaan 2 setback, Prime Minister Narendra Modi praised the mission’s attempts. He was present at the ISRO Telemetry, Tracking and Command Network (ISTRAC) Mission Operations Complex in Bengaluru to witness Vikram’s smooth landing on the lunar surface.

“Life is full of ups and downs. This is no small achievement. The entire nation is proud of you. Hope for the best,” the Prime Minister told the scientists.

In a tweet later, PM Modi said: “India is proud of our scientists! They’ve given their best and have always made India proud. These are moments to be courageous, and courageous we will be!”

“We remain hopeful and will continue working hard on our space programme,” he further said in his tweet.

However, not everything is lost, as the Orbiter that ferried Vikram and Pragyan to the orbit of the Moon stays operational. It carries eight science payloads, the highest among Chandrayaan 2’s three modules, and will continue for a year to perform remote sensing observations from a 100 km orbit.

The instruments on the Orbiter are meant to map the lunar terrain, examine the intensity of solar radiation, as well as examine the presence of major elements such as Magnesium, Aluminium, Silicon, Calcium, Titanium, Iron, and Sodium. It will also conduct a quantitative estimation of water-ice in the polar regions of the Moon.

Catch a crime before it occurs with cameras for intelligent security